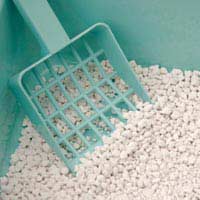 When Janet picked up her cat Sam from her local cattery she was very upset. Sam had lost weight and his fur was matted around his rear end. Occasionally at home she had to wash or brush Sam's rear end if he got mucky, so she knew it could happen. She had told the cattery owner this and had been assured that it would not be a problem. It had taken Janet hours of patient brushing to clean Sam's fur. His weight was soon back to normal but the experience had left Janet with a distrust of catteries.

When Janet phoned the cattery owner complaining about the condition Sam was in when she collected him, she was told that the owner had been unwell during the time that Sam had been boarded. She had relied on temporary staff to look after the cats. She admitted that perhaps she hadn't given proper instructions to the staff and they possibly overlooked Sam's dirty rear end. Janet protested that you could actually smell how dirty Sam was. The cattery owner could only apologise, when questioned about Sam's weight loss she said that some cats do stop eating for a time. Usually it does not last more than 24 hours .In some cases regardless of how much you try and tempt them, the cat flatly refuses to eat. Again she apologised and offered a free week's boarding. Janet said thank you but no thank you. She didn't feel she could trust a cattery again.

Janet was faced with a problem, she wanted her annual holiday but also needed to know that Sam was looked after properly. She discussed this with her cat loving friend and was told to try the cattery which her friend used. It was a much smaller establishment to the one that Janet had used previously. It was owned and looked after by one person and her husband. Janet's friend had used them for years and had never had a problem. Janet phoned the cattery and explained her bad experience to the owner who was very sympathetic. She told Janet that yes, sometimes a cat will not eat but she usually found that after a day, she is able to find something to tempt them. As for the dirty rear end, she explained that the litter can sometimes stick to the cats fur when it uses the tray. If it isn't brushed off quickly it can become a problem. The cattery owner suggested that Janet book Sam in for a long weekend while she was at home. She would only be charged for the basics, e.g.. food and litter, in this way if there were any real problems with Sam, Janet could collect him. She agreed to this and Sam was booked in from a Friday to Monday.

Sam's weekend stay went very well, on the Saturday he was eating Dry cat food and by Sunday was enjoying his normal diet. The problem with the rear end had been eliminated by using an open litter tray rather than a closed in one. The cattery owner explained that as Sam was a big cat, in a closed in tray he had to crouch low to relieve himself and the litter stuck to his fur. He went home on the Monday evening in good health and spirit. It seemed that Sam was happier in a smaller cattery where he was given more attention. The cattery was slightly more expensive than the previous one but Janet wasn't worried about the cost, she booked Sam in for a fortnight in the summer, not entirely at ease but hopeful.

Janet phoned several times while she was on holiday just to check on Sam. If he had been fretting or unwell she had made contingency plans. Her friend would collect him from the cattery and feed him at Janet's house. It would not have been ideal as the house alarm would need to be turned off. If Sam went missing because Janet wasn't around, she could not expect her friend to spend time looking for him. In the event all was well, Sam ate as normal and he was groomed daily. When Janet collected him he looked fine, if anything, he had put on a little weight. Janet was delighted and gave the cattery owner extra money just for looking after him so well. The cattery owner promptly put it in her cat rescue box, which further impressed Janet. She now felt happy that she had found a reliable trustworthy cattery for Sam's future holidays.
Next Page